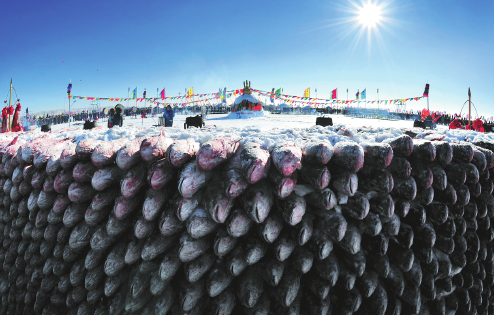 Gone fishing: fish are stacked high after the harvest of the annual winter fish hunt at Chagan Lake in Jilin province. The province has been preserving the skills and traditions of winter fishing for more than a thousand years.

On the shores of Chagan Lake, China's seventh largest freshwater lake in northwestern Jilin province, lives the world's oldest fishing tribe, which has preserved the skills and traditions of winter hunting for more than a thousand years.

Fishing-related objects can be seen everywhere in the village, such as nets drying in courtyards and on rooftops, and fish-themed paper cut-outs decorating the windows alongside poetic couplets framing the doors.

Winter fishing on Chagan Lake began during the Liao (916-1125) and Jin (1115-1234) dynasties. Every year from December to the following January, the spectacle provides a feast for northern people and attracts tourists from all parts of China to participate and celebrate.

When the lake is covered by thick snow on its surface, groups of fishermen get their ice chisels, horse-drawn winches and fishing nets ready for the month-long hunting season.

After a traditional ceremony to express their gratitude for the grace of the lake and to pray for a good catch, the fishermen led by a head man choose a fishing location, then drill more than 400 holes-leaving about 60 meters between each-around the location in the frozen lake and place a 2,000-meter-long net underwater. A couple of hours later, with the rotation of a horse-drawn winch being used to pull the net out of the ice holes, hundreds of thousands of flapping fish spill out upon the ice, freezing solid in just a few minutes.

More than 300 metric tons of fish were caught in their massive net on Dec 27 last year, and the first fish caught at the start of winter fishing season fetched a record-breaking 918,888 yuan ($132,345).

Shi Baozhu, who is in his mid-80s, is the 19th generation of head fisherman. Shi began fish hunting when he was 15 and became the head fisherman at the age of 23. As the most experienced fisherman on Chagan Lake, he is the hero of every year's winter fish hunt.

"A qualified head fisherman has high expectations put upon him," Shi said, while squatting on the ice to observe the fish. "Experience is very important when it comes to locating the fish. When you walk on the ice and find small bubbles, it means the fish are still there."

Shi retired at the age of 55. His biggest concern used to be that the winter fish hunting technique would be lost one day. But now he no longer worries, as his apprentices have learned well and mastered the intricate skills.

"Chagan Lake's winter fish hunt is a living fossil for us to research the fishing tribes of ancient times and their methods," said Cao Baoming, a folklorist in Jilin. "The fish hunting process, with all its intricate details, makes for a good example of why it is important to protect these old traditions and our cultural heritage. It preserves people's memory," he added.

The winter fishing on Chagan lake is currently listed as a national intangible cultural heritage, and the Chagan Lake Bighead Carp has become a famous trademark in Jilin as well as a well-known product nationwide.