Fuzhou, capital of East China's Fujian province, is expected to become a major national base for the marine economy, according to an action plan proposed by the Fuzhou committee of the Communist Party of China and the city government late last year.

The plan, entitled "the Action Plan for Building a 'Maritime Fuzhou'", envisages the city's marine industries having a total output of 1 trillion yuan ($145 billion) in 2025.

It says the target for 2020 is 700 billion yuan in output value from the marine economy.

In 2015, Fuzhou's marine economy realized an output value of nearly 300 billion yuan, accounting for about 30 percent of its total output value. The city's marine economy includes port-based industries such as shipping and logistics, fishing, shipbuilding and maintenance, marine engineering and equipment production, marine tourism and other related sectors.

According to the plan, Fuzhou aims to build a "strategic, pivotal city for the 21st Century Maritime Silk Road".

For more than 1,000 years, Fuzhou and its neighboring cities in Fujian had been the starting points of the ancient Maritime Silk Road, for trade between China and regions along the coasts of the Pacific, Indian and Atlantic oceans.

The plan said that Fuzhou's move to build a maritime city should serve the Belt and Road Initiative, by strengthening cooperation with Belt and Road regions.

The Maritime Fuzhou plan involves major targets, including building a hub city for the 21st Century Maritime Silk Road, building a pivotal city for interconnectivity with Belt and Road regions, enhancing cross-Straits cooperation in the marine sectors, building a leading city in the country's marine economy and marine-related innovation, building a fishery trade center in East Asia and developing a coastal city with historical and cultural significance.

The plan states that it should serve the nation's strategies by building a maritime cooperative corridor that covers the coasts of the Pacific, Indian and Atlantic oceans.

One priority is developing Fuzhou into an international shipping hub.

It is projected that Fuzhou Port will have an annual container throughput of 3 million twenty-foot-equivalent units by 2020.

To attract domestic and foreign businesses to invest in Fuzhou, four port-based industry zones are planned for the Jiangyin harbor area, on the southern and northern coasts of Luoyuan Bay and Songxia Harbor areas, focusing on industries such as new materials, metallurgy, logistics and agricultural product processing.

A range of new industries have been planned for Fuzhou, including marine engineering equipment, marine energy, marine medicines and marine tourism.

For marine tourism, four holiday resorts will be developed on Langqi Island, in areas near Mazu Island, which is a part of Taiwan, on the coasts of Changle city and on the coasts of Fuqing Bay.

Fishing is Fuzhou's traditional industry, based on which the city hopes to develop a related trading center in East Asia. For this purpose, a large seafood exchange, two processing zones and three offshore fishing bases will be built.

Commenting on the plan, Ni Yuefeng, Party chief of Fuzhou, said the Maritime Fuzhou blueprint is expected to help Fuzhou in its transformation from a near-sea city to a major marine economy power of the nation.

Fuzhou has 1,310 kilometers of coastline, accounting for one-fourth of Fujian's total. With 10,573 square kilometers of sea area - equivalent to 46 percent of Fuzhou's land area - the city has rich resources to develop a marine economy.

However, the central area of Fuzhou is located at a narrow basin of the Minjiang River and is more than 50 km away from the sea. The limited space has become a bottleneck for Fuzhou's development.

"To make Fuzhou a marine economy hub, the first thing is to turn Fuzhou from a nearsea city to a coastal city," said Ni.

Fuzhou took a concrete step forward for this transformation by constructing the Fuzhou Binhai New City, beginning in February this year.

Lin Fei, deputy mayor of Fuzhou, said Binhai is located in the coastal area of Changle, and plans for its development will see it cover 188 sq km upon completion. It aims to offer ample development space for Fuzhou's growth, especially in its marine economy. 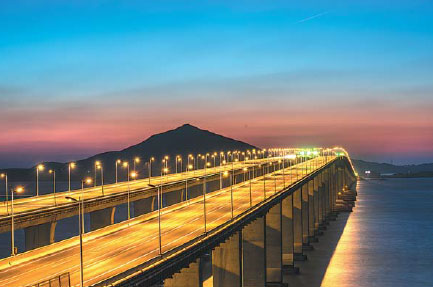 The Pingtan Cross-Sea Bridge that links the island county of Pingtan and Fuqing, is operational in 2010. Weng Caiwu / For China Daily