Attorneys for Yantai fishermen demand damages for losses from 2011 disaster

Fishermen affected by the 2011 Bohai Bay oil spill have demanded 170 million yuan ($24.5 million) in damages from the oil giants behind the disaster.

Lawyers representing 205 people from Yantai, Shandong province, who are suing China National Offshore Oil Corp and ConocoPhillips revealed the compensation figure on Wednesday, according to a source at Qingdao Maritime Court.

"Seven representatives showed up at the court to exchange evidence," said Xue Wenshan, a court spokesman. "As the case has not yet entered the trial phase, there are still many uncertainties."

The plaintiffs, mainly from Yantai's Muping and Changdao counties, claim their livelihoods have been severely affected by leaks from the Penglai 19-3 Oilfield. Two spills over a period of weeks in June 2011 polluted more than 6,200 square kilometers of seawater, including 870 sq km that was heavily polluted, according to investigation reports. 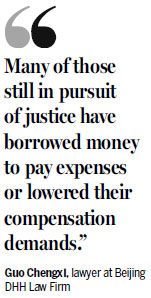 The oilfield is jointly operated by CNOOC and a Chinese subsidiary of US oil company ConocoPhillips.

In April 2012, authorities fined the oil companies 200,000 yuan as an administrative punishment and ordered them to pay 1 billion yuan toward work to restore the environment and protect the Bohai Sea. However, the amount did not include compensation for fishing communities.

Shandong's fishing industry has reported huge losses in recent years, and "there is a strong correlation between this fact and the oil spills", a provincial fishery official told China Youth News.

According to Guo Chengxi, a lawyer at Beijing DHH Law Firm, also speaking to China Youth News, the fishermen have paid 2.08 million yuan to fund the litigation.

"More than 40 fishermen have withdrawn their claims in the past year because they were uncertain about whether we can win the case, or were not able to afford the legal expenses," he was quoted as saying. "Many of those still in pursuit of justice have borrowed money to pay expenses or lowered their compensation demands."

Fish farms in other provinces have filed similar lawsuits against the oil giants.

On Dec 9, Tianjin Maritime Court heard a case in which five aquaculture farmers demanded more than 1 million yuan in compensation for seawater pollution caused by the 2011 oil spills, which they say led to a sharp decrease in their fishing output. The court has yet to issue a verdict.

The devastation caused by the Bohai Bay oil leaks was to highlight the need for tougher controls on maritime pollution.

Lawmakers amended the Marine Environmental Protection Law on Nov 7 to introduce higher financial penalties for polluters, with companies now facing fines of 20 to 30 percent of the direct losses caused by their actions.